The piano in the studio just got tuned awaiting the arrival of pianist Cagdas Soylar. She will accompany weekday children’s class for three weeks starting on Tuesday, September 28 as a pilot program to use live music for classes. It has been a longtime plan to have live music for classes at Movement Arts Atlanta (MAA). Live music is unusual these days but it is hoped that it will add to the learning and joy of class for the students of MAA.

Historically, all dance classes were accompanied by live music, usually piano for ballet and drums for modern. Interestingly, music for dance was once considered lower, not serious. We have have American Modern Dance Pioneer, Isadora Duncan, to thank for helping to change this attitude. Much to the establishments chagrin, she chose to dance to works from “serious” concert composers such as Beethoven and Gluck. Now it is common for dances to be made to any kind of music the choreographer chooses. Duncan also was an early proponent of using dance to explore social themes. 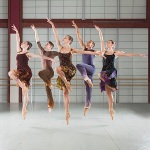 As part of the Inman Park Festival and Tour of Homes, Movement Arts Director, Carolyn Stine McLaughlin, manages the Inman Park Dance Festival. This is a free admission dance performance that presents pre-professional and professional dance companies from the Atlanta area and the State. The companies present works from the dance vocabularies of classical ballet and modern dance.

The performances are on Saturday, April 29 and Sunday, April 30 at 4:0 pm and will take place in The Trolley Barn, 963 Edgewood Avenue NE, 30307. The performance are free, family friendly and last for just over an hour.

For the 2017 performances four companies will be presenting. They are Atlanta Ballet Centre Theatre, Ballethnic, Emory Department of Movement Studies, Full Radius Dance and the Georgia Ballet.

This is a great event to see several of the significant assets which are part of Atlanta’s recigh dance community.